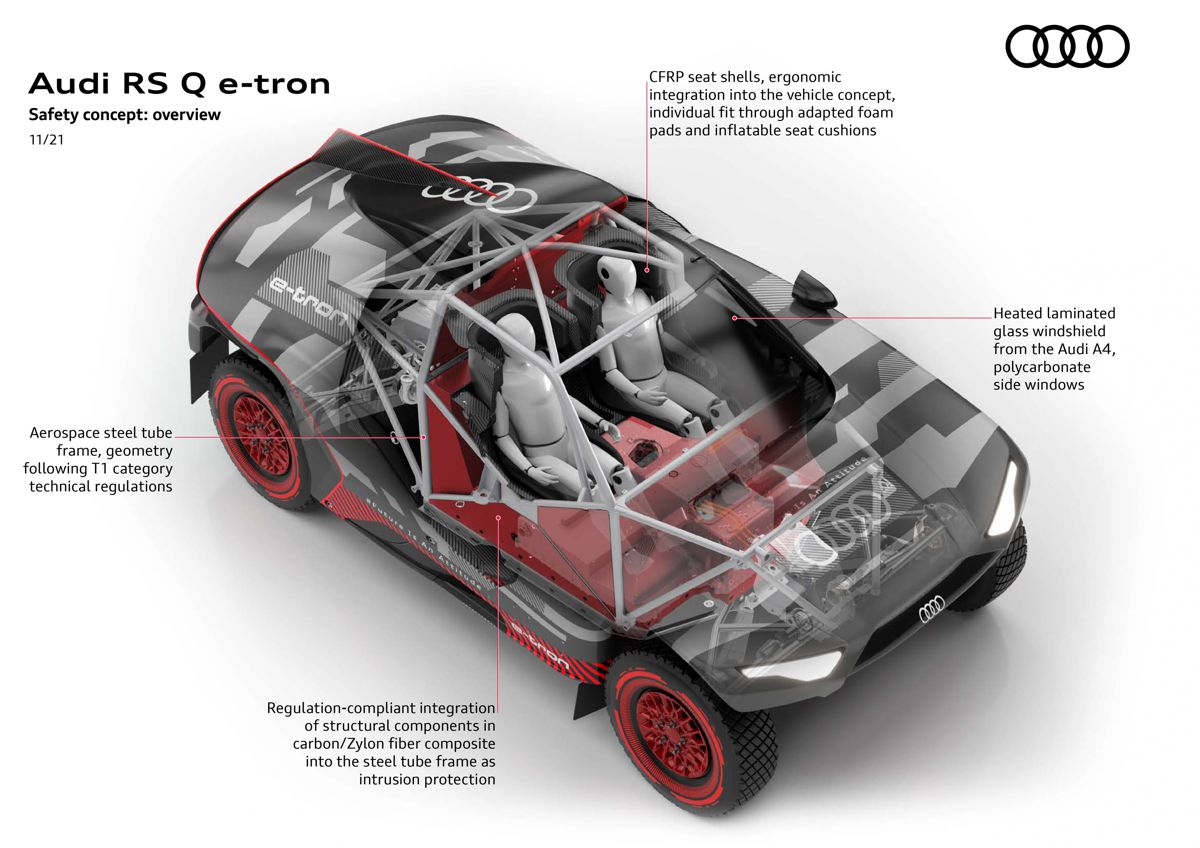 Long before Audi unveiled the RS Q e-tron to the public in summer 2021, the racing engineering team was already intensively involved in the Dakar Rally.

The risks in off-road racing were at the centre of the considerations for a sophisticated safety concept. From the electrical safety of the high-voltage system to optimum passenger protection in the event of accidents, the design department mastered many challenges.

The protective and load-bearing basic structure of the Audi RS Q e-tron consists of a tube frame. The regulations stipulate that this structure be made of metallic materials. Audi has opted for a heat-resistant, alloyed quenched and tempered steel from the aerospace industry that contains the alloying elements chromium, molybdenum and vanadium (CrMoV). The tube frame complies with the geometry defined in the regulations and fulfils the required static pressure tests. Audi additionally protects the drivers with panels made of composite materials in the spaces between the frame. These components made of carbon fibre-reinforced plastic (CFRP), in some cases supplemented by the tear-resistant Zylon, prevent the penetration of sharp and pointed objects from outside. 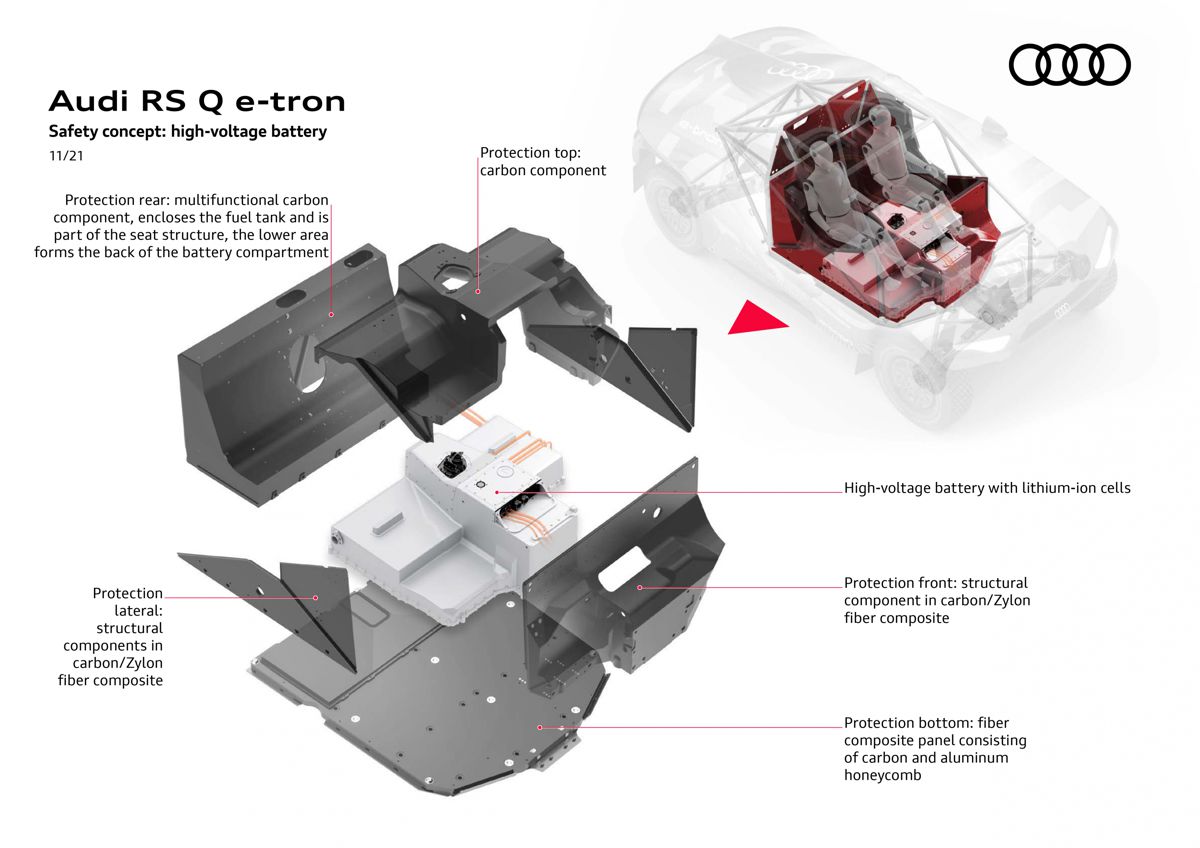 Likewise, they protect the drivers and co-drivers from any problems with the high voltage system. “The structural design of the frame incorporated methods and findings that we have honed over decades in many disciplines,” says Axel Löffler, Chief Designer RS Q e-tron. These include the tubular frame designs from the DTM (2004 to 2011) as well as the sheet steel chassis in rallycross (2017 to 2018) and the CFRP monocoques in the LMP sports cars (1999 to 2016), in the DTM touring car (2012 to 2020) and single-seater racing in Formula E (2017 to 2021).

Hardly any other automobile manufacturer has realized so many programs with such breadth and success. But it is not only in the chassis area that Audi benefits from its valuable wealth of knowledge. Depending on the component, the body is made of CFRP, Kevlar or composite construction, in some cases supplemented by an internal honeycomb structure. In the interests of high scratch resistance, a heated laminated glass windshield from the Audi A4 is used, while the side windows are made of lighter polycarbonate. Minimizing occupant stress is helped by the maximized field of vision and the seal against dust. In the cockpit, the driver and passenger sit in CFRP shells. Their design is similar to that of the DTM and LMP. The deformability in the shoulder area required by the regulations is one of the few differences. While all the seat shells are identical, the foam inlays and inflatable seat cushions adapted to each body individually perfectly absorb impacts.

The high-voltage system of the electric drive with its energy converter requires multiple protection. The encapsulation of the centrally located and thus particularly safe high-voltage battery comprises CFRP structures, some of which are reinforced by Zylon. The protection at the bottom is very complex. In off-road sports, the underbody is the assembly subjected to extreme stresses, including meter-high jumps, whirled-up stones and large ramp angles. Its lowest layer consists of an aluminium plate. It resists abrasion by hard objects and partially absorbs impact energy. The energy-absorbing foam above absorbs the impacts and distributes them to the sandwich structure above. This third structure protects the high-voltage battery and the gasoline tank of the energy converter. The CFRP sandwich structure performs two main tasks: The absorption of the surface load, which is passed on from the aluminium plate via the foam, and the dissipation of energy by crushing when the surface load is exceeded. This controlled collapse thus protects the battery above. In the event of excessive damage, the assembly can be easily replaced during the evening service in the rally bivouac. 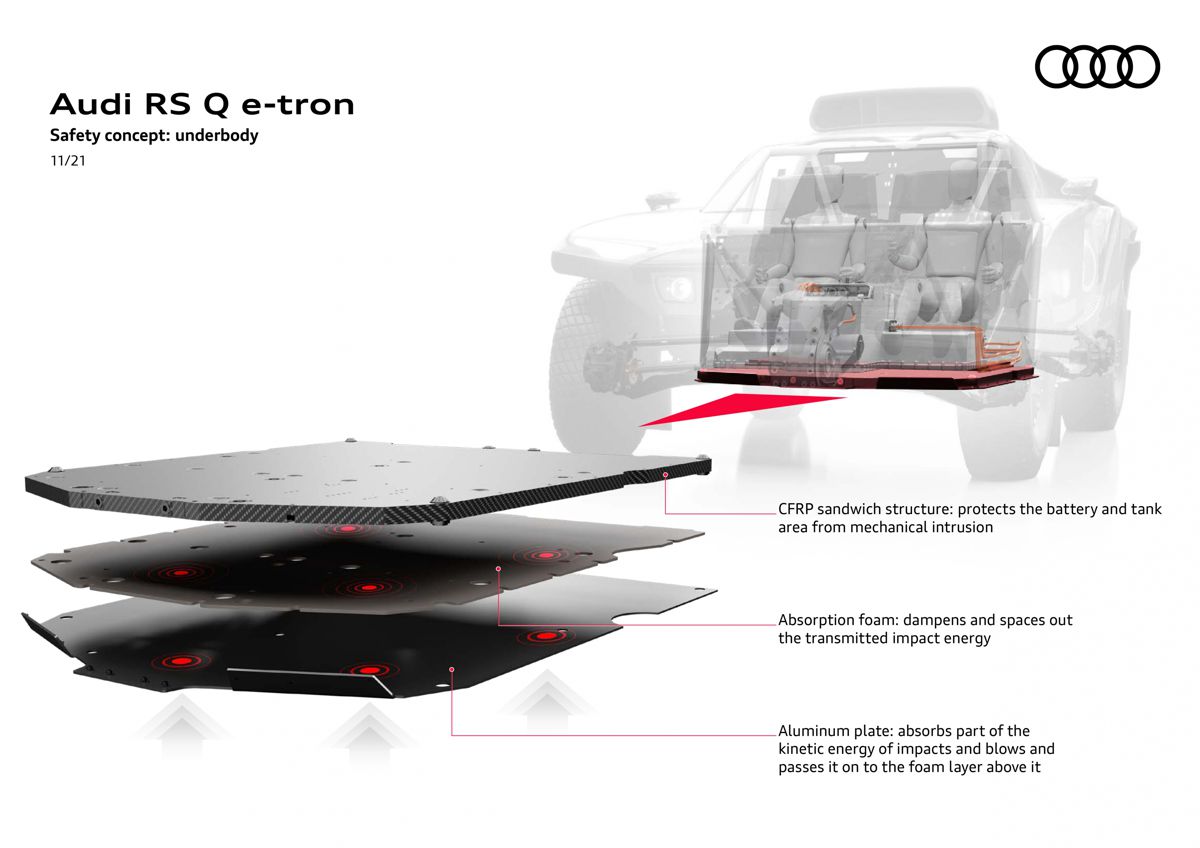 In total, this underbody with its triple protection against impacts and intrusions is 54 millimetres thick. “With these designs, we see a direct transfer of our knowledge from the circuit to cross-country rallying,” says Axel Löffler. “And there are further parallels, for example in the loads for the chassis and underbody. Admittedly, the energies are higher offroad because of the long suspension travel, the duration of the load and the vehicle mass. But the g-forces measured are similar to those of Le Mans prototypes.”

Further measures complete Audi’s high-voltage protection concept. An ISO monitor, known from LMP and Formula E, detects dangerous fault currents. In the event of maximum kinetic loads, such as a collision, the system switches off automatically above a threshold value. Control lamps on the body and an acoustic signal tone serve as danger warnings to the outside world – for example after an accident. Optimum insulation of the system against water during river crossings and an electrically insulating extinguishing agent in the onboard fire extinguishing system protects passengers in these extreme physical situations. The entire team, including drivers and co-drivers, also underwent high-voltage training in advance, as did rescue teams from the organizer.

Other regulations and devices provided by the organizer round off the overall safety concept. For example, the occupants can make an emergency call via a safety tracking system including an SOS switch and be found quickly. An accident data recorder records the most important measured variables for later analysis. An onboard surveillance camera shows what is happening in the cockpit. The Sentinel system makes overtaking safer in the dust typical of the desert. And finally, the regulations limit the top speed in the T1 category to 170 kph.

With this holistic approach, Audi is now continuing its role as one of the masterminds of safety in motorsport in the desert as well. Audi factory drivers Stéphane Peterhansel, Carlos Sainz and Mattias Ekström as well as their co-drivers Edouard Boulanger, Lucas Cruz and Emil Bergqvist can look forward not only to the RS Q e-tron as the most innovative prototype for cross-country rallying but also to maximum safety.