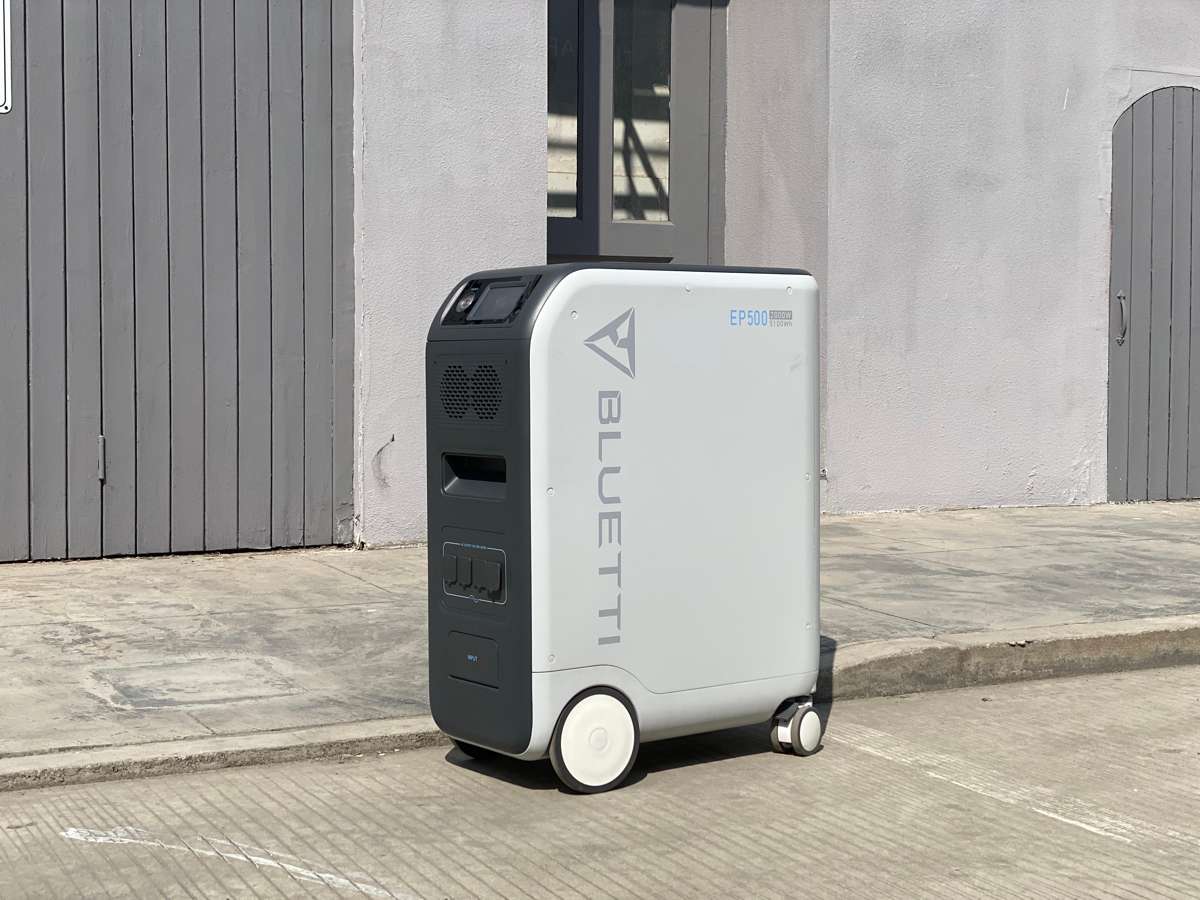 Back in July 2020, BLUETTI a renewable energy company set its sights on the solar energy storage market and announced the launch of its first 2000Watt battery product, the BLUETTI AC200.

The campaign raised over US$6.8M and broke the highest funding record of its kind, which left its competitors far behind. 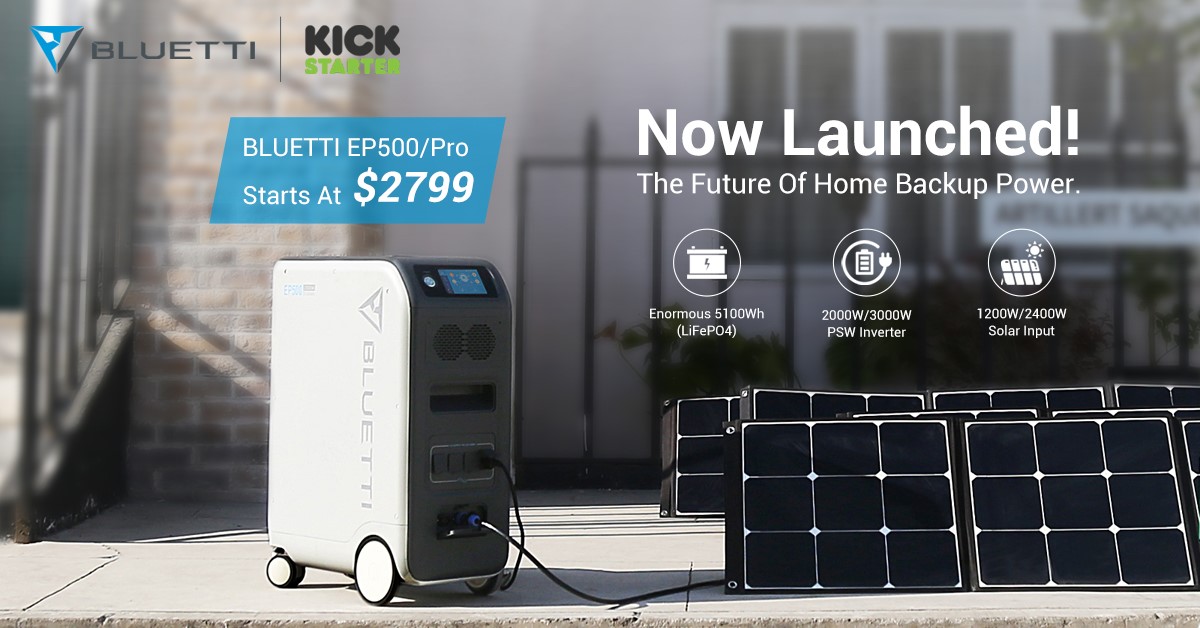 BLUETTI is aimed to take the energy storage world by storm with the release of its first home energy storage system series – the EP500 & EP500 Pro. Compared to existing giants like the Powerwall or SonnenCore, the EP500 series has a much smaller 5.1k Wh capacity.

However, with the four smooth-rolling transport wheels, the EP500 is not meant to be a large solar battery mounted on the wall or garage. The BLUETTI EP500 is designed to be a “No Installation Needed”, plug and play powerhouse that can easily be moved to the desired location whenever needed. 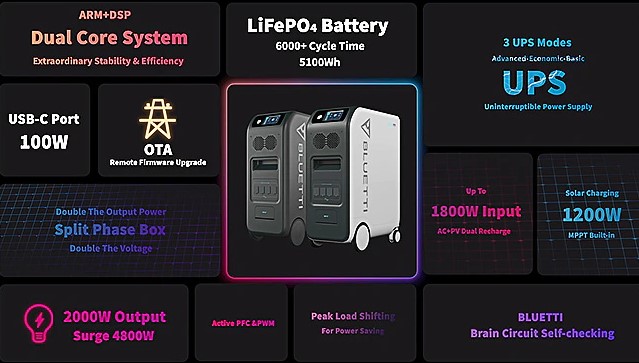 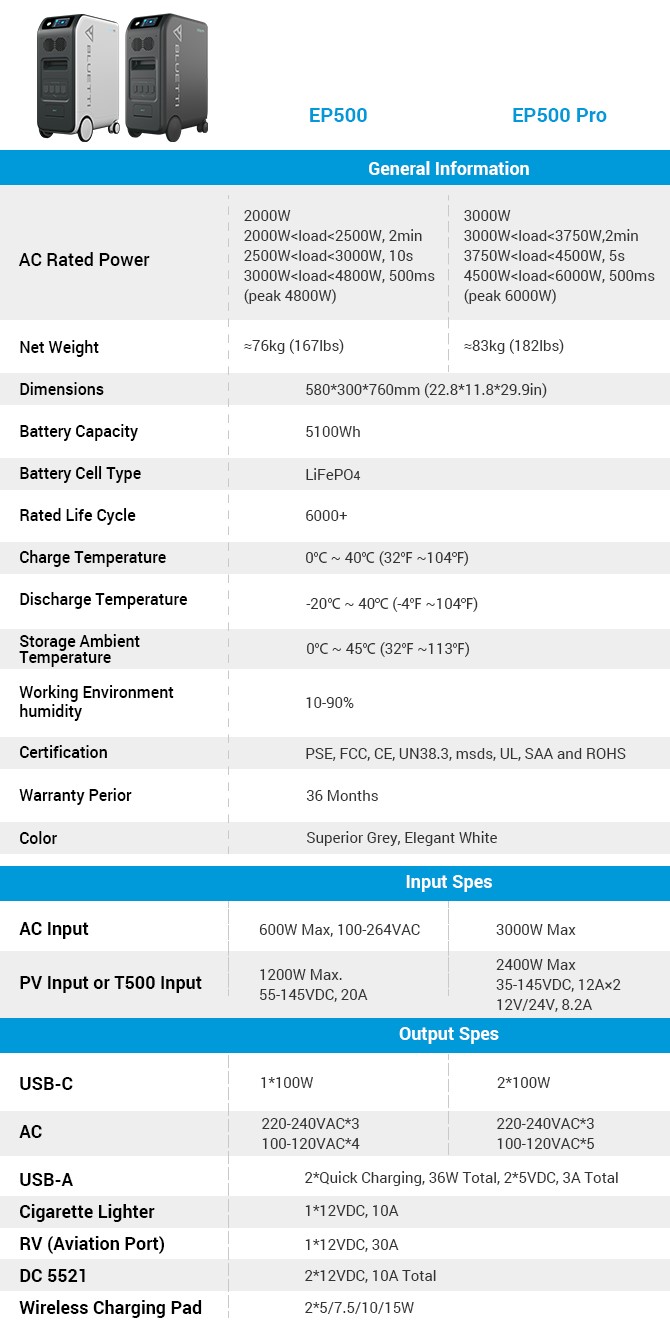 The EP500 is designed to cover your essential needs during power outages, EP500 is equipped with a monstrous 2,000 Watt pure sine wave AC inverter and surge up to to 4,800 Watts, and the Pro version can provide a continuous power at 3,000 W.

Both are packed with 5,100Wh, based on ultra-durable and safe LiFePO4 battery cells with a cycle life of up to 6,000 cycles.

The BLUETTI team is dedicated to building a future with eco-friendly renewable energy. Antique gasoline generators, which produce toxic fumes pollution, unbearable noise and consume non-renewable petroleum resources are a thing of the past. 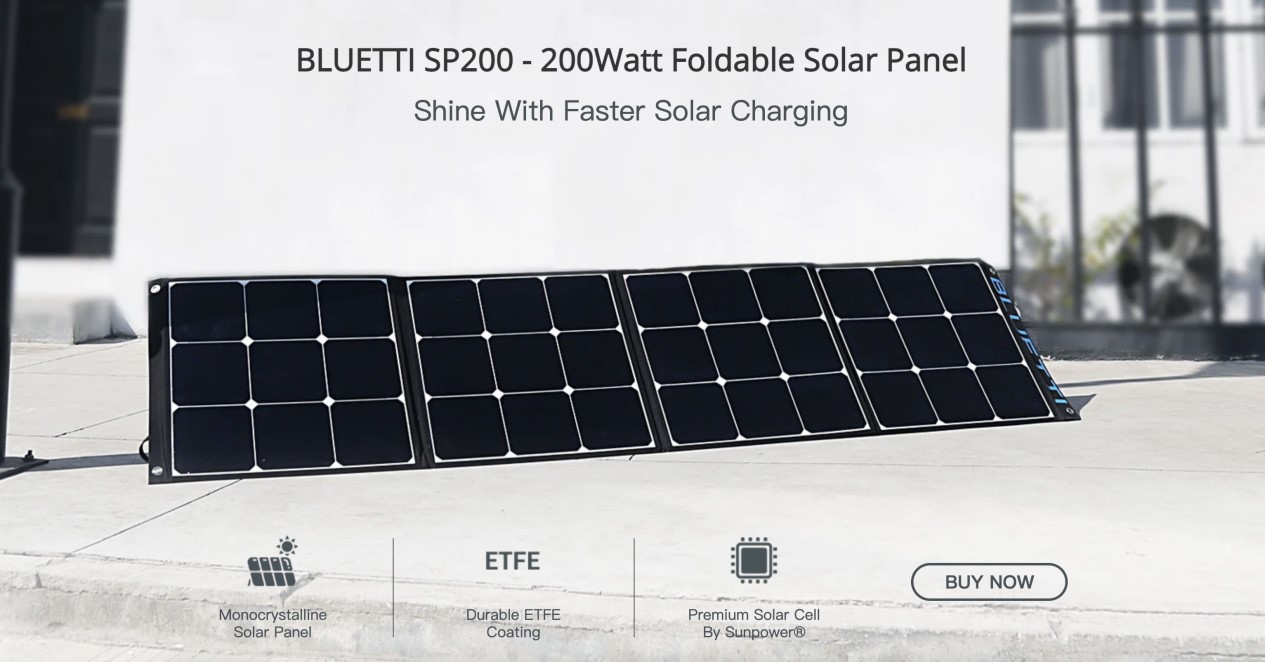 Last but not least, the Bluetti EP500 series can also be charged from solar and AC simultaneously, handling up to 1,800 W (4,000 W for the pro version) and charging the battery pack at lightning speed.

The unit is about 180lb and just about the same size as a household air purifier. The EP500 series still can be moved around easily with the help of 4 smooth-rolling wheels.

Compared to the mounted backup power systems like the Tesla Powerwall and LG Chem RESU, the BLUETTI EP500 series features incredible mobility and are even possible to be packed for a road trip.

An uninterrupted power source (UPS) is an electrical apparatus that provides emergency power to essential loads when the grid goes down. EP500 & EP500 Pro is the key to provide continuous power and to help you get through power outages at ease.

With the BLUETTI EP500, you will never have to face a panic when a power outage occurs. Data on the computer will be preserved, food in the refrigerator will stay cold, and all the lights you need will stay on.

The UPS function on EP500 series are plug-and-play, all you need to do is connect it to the wall outlets and turn on the UPS Mode. However, you can also have much more power by integrating the unit to your home circuit with BLUETTI Home Integration Kit.

To monitor and operate remotely, the BLUETTI EP500 series now supports a remote App. With BLUETTIs exclusive B-Lynk connection technology, you can easily monitor your EP500’s status and adjust settings it whether it is near you or a thousand miles away. No more having to walk to a unit to determine remaining battery or inverter capacity. 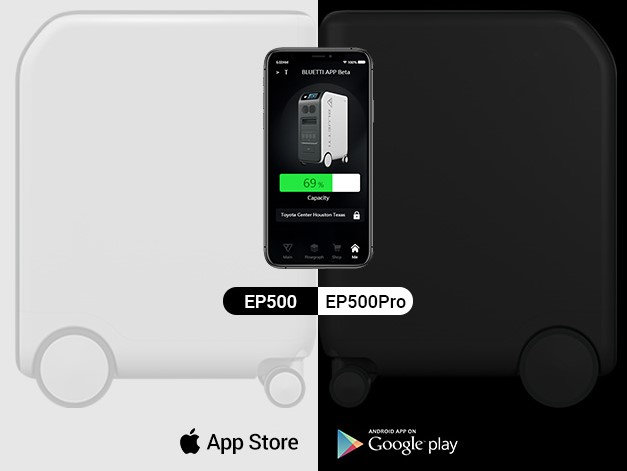 The rated AC inverter output power of 2,000/3,000 continuous watts is sufficient for most power needs, however, certainly not enough to power all of your electrical appliances.

As an emergency energy storage power for the whole family, Bluetti has an option to double the AC output. For higher power loads, Bluetti is releasing its own “Split Phase Box”. With the “Split Phase Box,” users can connect two EP500/Pro’s in series, and double the rated power output and capacity.

The box will also will also offer the option of 220/240 volt output to power 240 volt appliances, which means you can now run your home air conditioner, clothes dryer, in-wall electric heater and other high power appliances with ease. No need to worry about power outages on a hot summer nights or cold, bitter winters anymore. 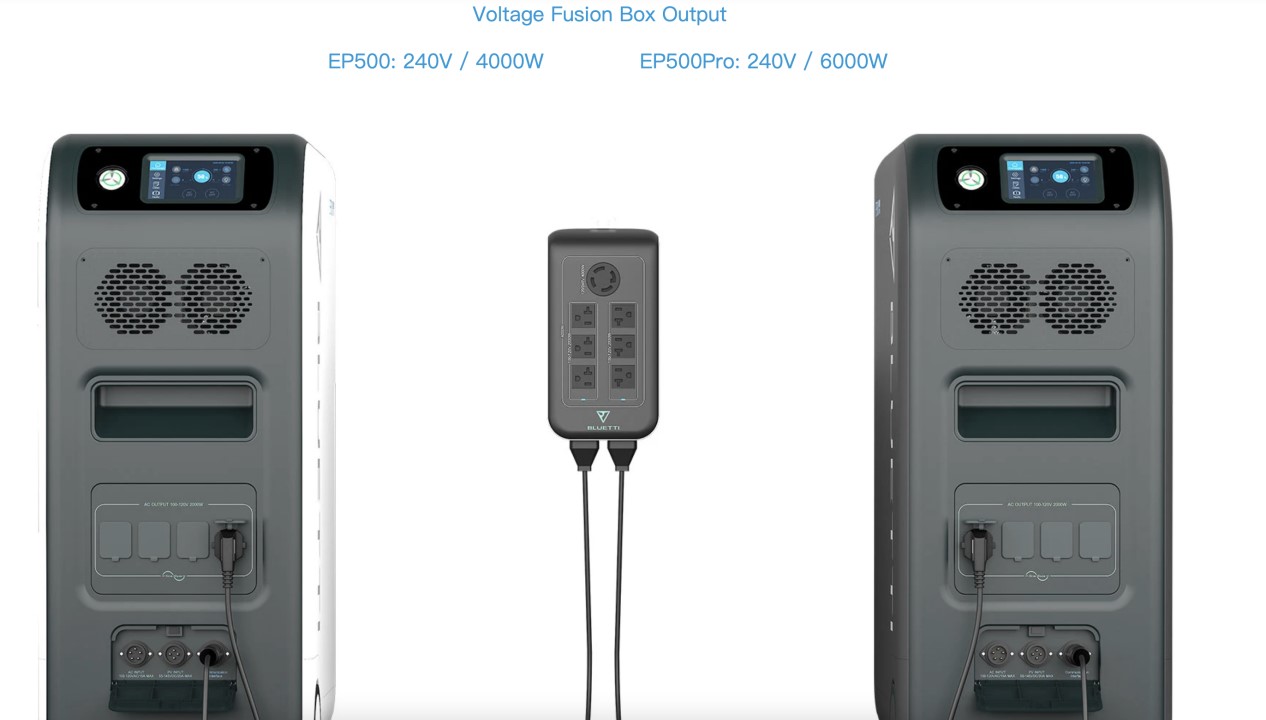 The bluetti team has promised to start shipping EP500 in June and EP500 Pro in August, which is not a short delivery time, but according to the feedbacks from backers in the AC200 campaign, this definitely will be worth the wait.

To make up for the customer’s long wait, BLUETTI provides a 3-year warranty and lifetime tech support for EP500 & EP500 Pro for their crowdfunding backers. If this is not enough piece of mind for you an extended one-year warranty for $399 or $699 for two, which makes the total warranty time to 5 years.

BLUETTI has released more discounted perks on their kickstarter campaign, enter to claim your BLUETTI power.

0 0 0
Previous : RoadSync launches BigRig411 to connect Fleets with repair and maintenance vendors
Next : ACEINNA and Point One Navigation launch OpenARC for precise positioning