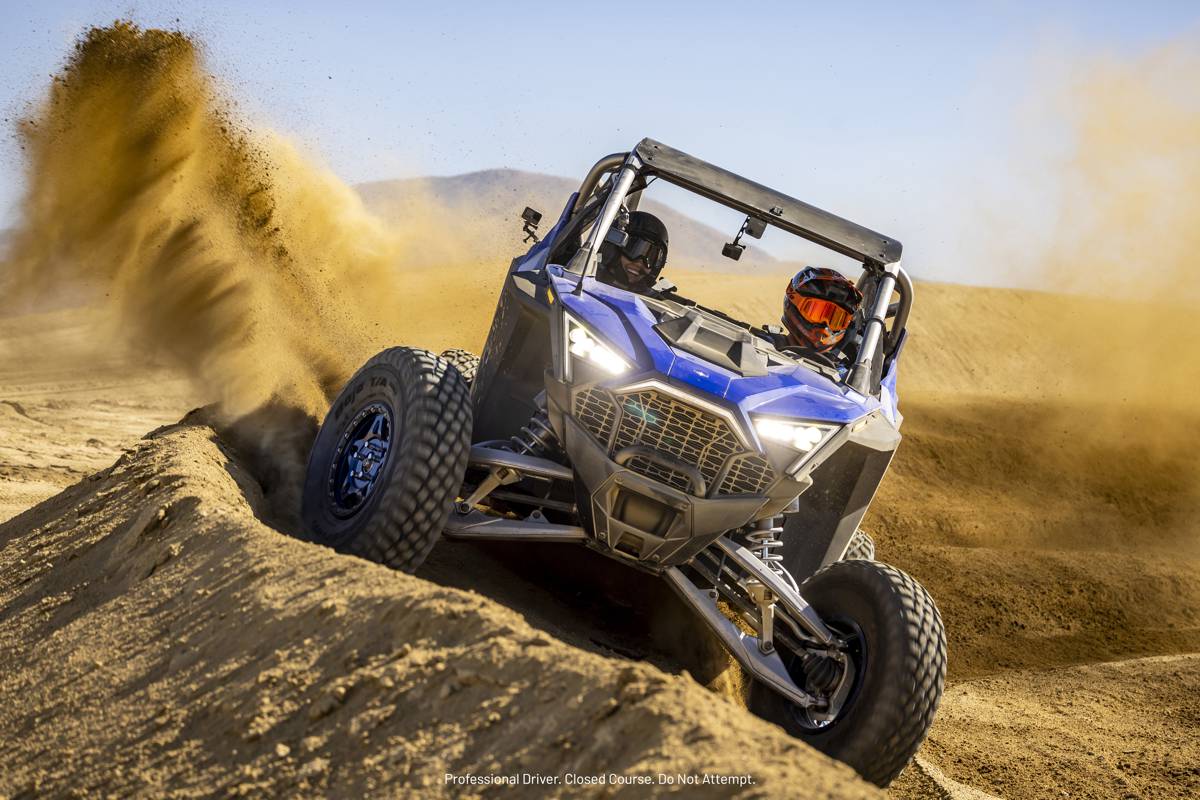 Showcasing in grand fashion just how thrilling off-roading can be, Sunday Strolls tests the courage of these four fearless athletes, each with little-to-no side-by-side experience, as they ride shotgun with Anderson while he pushes the limits of a near-stock RZR Pro R around the Los Angeles County Raceway Motocross (LACR) track in Southern California.

With nearly a mile of track to work with, Anderson is in full “send” mode, backing his RZR Pro R into hairpin turns, flying through whoops, and grabbing tons of air* off the track’s multiple table-top jumps. With talent fully wired for audio, the Pro R outfitted with multiple GoPro cameras, and a total of nine cameras around the track, including hand-held cameras, drones, and a camera-equipped RZR XP 1000 – not a single “oh crap” moment was missed.

“Sunday Strolls is what we live for – to introduce new people to side-by-sides and demonstrate exactly why so many riders around the country eat, sleep and breathe off-roading,” said Reid Wilson, Vice President, Polaris RZR. “This was an extremely fun series to bring to life, as we connected world-class athletes from various genres who all share a passion for living life at full speed. Our four guests walked away with an entirely new perspective on the thrilling experience that a RZR, and side-by-sides in general, have to offer.”

Chad Johnson, aka “Ochocinco,” is a retired pro football wide receiver and four-time All-Pro. Ochocinco was widely known for his outgoing personality, but highly respected as a fearless receiver always willing to cross the middle of the field, despite the wrath countless receivers faced from hard-hitting defensive players.

Arguably the toughest MMA fighter in the women’s strawweight division, “Thug” Rose Namajunas is a two-time champion and current #1 contender. In 2017, as an underdog, Namajunas defeated the undefeated strawweight champion via knockout. In 2021, Namajunas re-earned the title and became the first female fighter to regain a championship belt.

Roy Jones Jr. is a former professional boxer and five-time world champion. Currently a commentator for nationally televised boxing events, Jones Jr. is the only boxer in history to begin his career in the light middleweight division and go on to win a heavyweight title. His grit and determination earned him a silver medal as the youngest boxer on the 1988 men’s U.S. Summer Olympics team. He’s highly regarded as one of boxing’s greatest champions and true legends, willing to step into the ring with any competitor throughout his illustrious career.

Most known as a fierce featherweight MMA fighter, Chad “Money” Mendes has competed in a variety of combat sports, including collegiate wrestling and bare-knuckle fighting. With a career MMA record of 18 wins and five losses, Mendes is a proven competitor with an unrivalled willingness and aggressive tenacity to step up to any fighter in the octagon. Mendes is also an avid outdoorsman who enjoys bow hunting and fishing.

With the launch of RZR Pro R, Polaris changed the game for high-performance, Wide Open side-by-sides. Featuring unrivalled power, strength and control, the Pro R packs the industry’s most powerful engine ever put into a stock side-by-side.