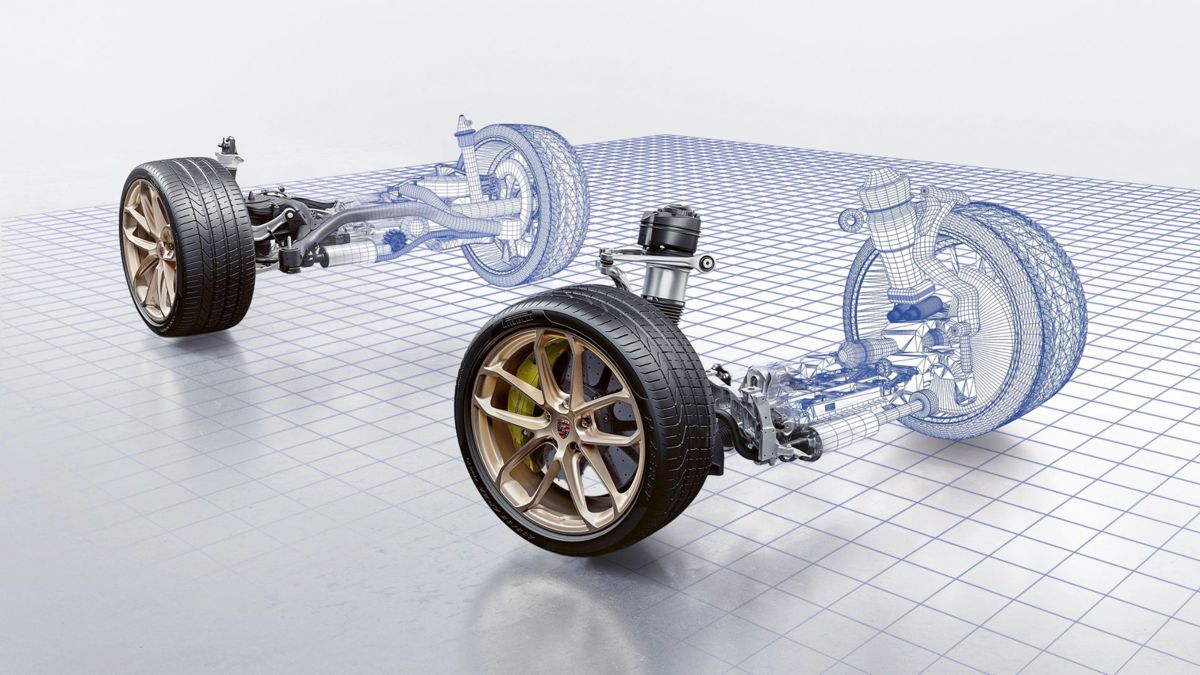 To continue implementing the integration of new chassis functions with a high level of efficiency, Porsche Engineering is relying increasingly on advanced digital development methods, with automation and simulation being key.

Convenient and economical or agile and dynamic? This question doesn’t even arise when designing today’s chassis systems – current vehicles are expected to meet all of these requirements. Chassis developers therefore need to find the exact mix of settings to ensure the required handling characteristics. Due to all the many different parameters and control variables, new vehicles sometimes have millions of test kilometres behind them before they reach series production.

Added to this are the ever-increasing number of electronic control functions, driver assistance systems and automated driving functions, as well as the ever-advancing connectivity between electronic systems in the vehicle. “They increase the effort involved in development even further, while at the same time there is less and less time available for calibration and validation,” says Eva-Verena Ziegahn, Senior Manager Chassis Systems at Porsche Engineering. “Traditional work methods involve numerous development loops – and are increasingly reaching their practical limits in terms of both time and costs.”

In order to continue implementing the integration of new chassis functions with a high level of efficiency, Porsche Engineering is relying on advanced digital development methods. The first step involves automating the test drives using prototype vehicles on the test track. “In driving tests involving physical stress on the test drivers, a vehicle dynamics control system assumes control of the vehicle,” explains Martin Reichenecker, Senior Manager Chassis Testing at Porsche Engineering. “To this end, we are working on a project to develop a model-based longitudinal and lateral dynamics control system for automated test drives.”

To prepare for a series of tests, a driver drives the route first, recording vehicle data such as speed and acceleration along with GPS data. This reference trajectory then provides the path for the vehicle dynamics control system during subsequent test drives.

“The system looks about a second into the future and uses the vehicle’s current position, speed and orientation to predict how the steering, and the brake and accelerator pedals, need to be adjusted in order to remain on the specified trajectory,” explains Fabian Pfitz, Development Engineer for Chassis Systems at Porsche Engineering. This is the key difference to conventional non-model-based driving dynamics control systems, which can only compensate for control errors and cannot calculate vehicle guidance predictively. In the future, this should also make it possible to conduct demanding driving tests with high-level driving dynamics automatically. Mastering driving conditions like these is difficult, because there is very little reaction time for steering and braking commands.

“We are currently optimising the way the driving dynamics control system is programmed so that it can also perform these tasks. To do so, we use artificial intelligence methods to improve the predictive capability and with it the precision of the control system,” says Pfitz.

The advantage of automated driving tests can be seen, for example, in endurance tests in which test drivers are continuously exposed to high physical stresses, for instance due to the specified driving profile on rough sections of road. “Work on model-based vehicle dynamics control systems for endurance tests has progressed to the point where it is likely to soon be able to be used for endurance testing in customer development projects,” says Max Schäfer, a doctoral student at Porsche Engineering. In the future, the model-based vehicle dynamics control systems will be used, for example, on the test track at the Nardò Technical Center (NTC) to perform highly dynamic driving tests using automation.

Complete virtual vehicle in the simulator

Fundamental challenges faced in real-life driving tests – whether with test drivers or automated – include high costs, considerable demands on time and the general availability of test vehicles. In early phases of vehicle development in particular, there are often no or very few prototypes available. In a further digitalisation step within chassis development, Porsche Engineering is therefore increasingly shifting vehicle tests from the road to the bench.

Individual assistance or driving dynamics control functions have been tested and calibrated on test benches for some time. However, isolated solutions like this don’t factor in the interactions between the individual systems in the complete vehicle. “This can lead to mutual interference that only comes to light in the subsequent driving tests and can then only be rectified at great expense,” explains Tim Wright, Development Engineer for Vehicle Dynamics Simulation at Porsche Engineering. “We have developed a test bench concept in which we integrate the functions and systems into a virtual complete vehicle and run them in a closed control loop. As in a real vehicle, the electronic control units communicate with each other by means of the data bus. This allows problems to be easily identified and remedied.”

The special feature of Porsche Engineering’s solution is the real-time rendering of actual road performance. For example, when the lane departure warning system intervenes in the steering during the test, the driver feels these forces directly on the steering wheel, as is the case in the vehicle. Another example is the effect of the stability programme. In this case, the driver perceives dynamic changes by looking at the simulation screen. “This is what makes the test realistic, and it is the prerequisite for virtual calibration in which the functions are tailored to the driver,” says Wright.

The test scenarios are either recorded in advance by a test vehicle equipped with a camera, or created on the computer. The virtual environment can be mapped out down to the last detail, so that the driver on the simulation test bench hardly notices any difference to reality. Since the virtual traffic situations can be configured to suit requirements, many different variants can be created, such as driving with and without oncoming traffic or driving during the day or night.

“The main advantage, however, is that we can generate potentially dangerous driving conditions aided by the computer, and reproduce them in the driving simulator without any safety risk for the test driver, such as evasive manoeuvres on wet roads at very high vehicle speeds,” says Wright.

In the future, Porsche Engineering will use tests on the simulation test bench to evaluate the safety of electronic systems and functions in the vehicle. During these tests, faults are deliberately imposed on the vehicle’s electronics. The driver on the test bench then evaluates the impact on the vehicle functions. The categorisation is based on an internationally standardised classification according to Automotive Safety Integrity Levels (ASIL).

“The more difficult the situation is to control, the more serious the consequences of the fault and the more frequently it occurs, the higher the safety require- ments become,” says Wright. “Currently, we are successfully using a simulation test bench for complete vehicle calibration and validation at our Shanghai site.” Further facilities are planned for the development departments in Mönsheim in Germany, in Cluj-Napoca in Romania, and in Prague. 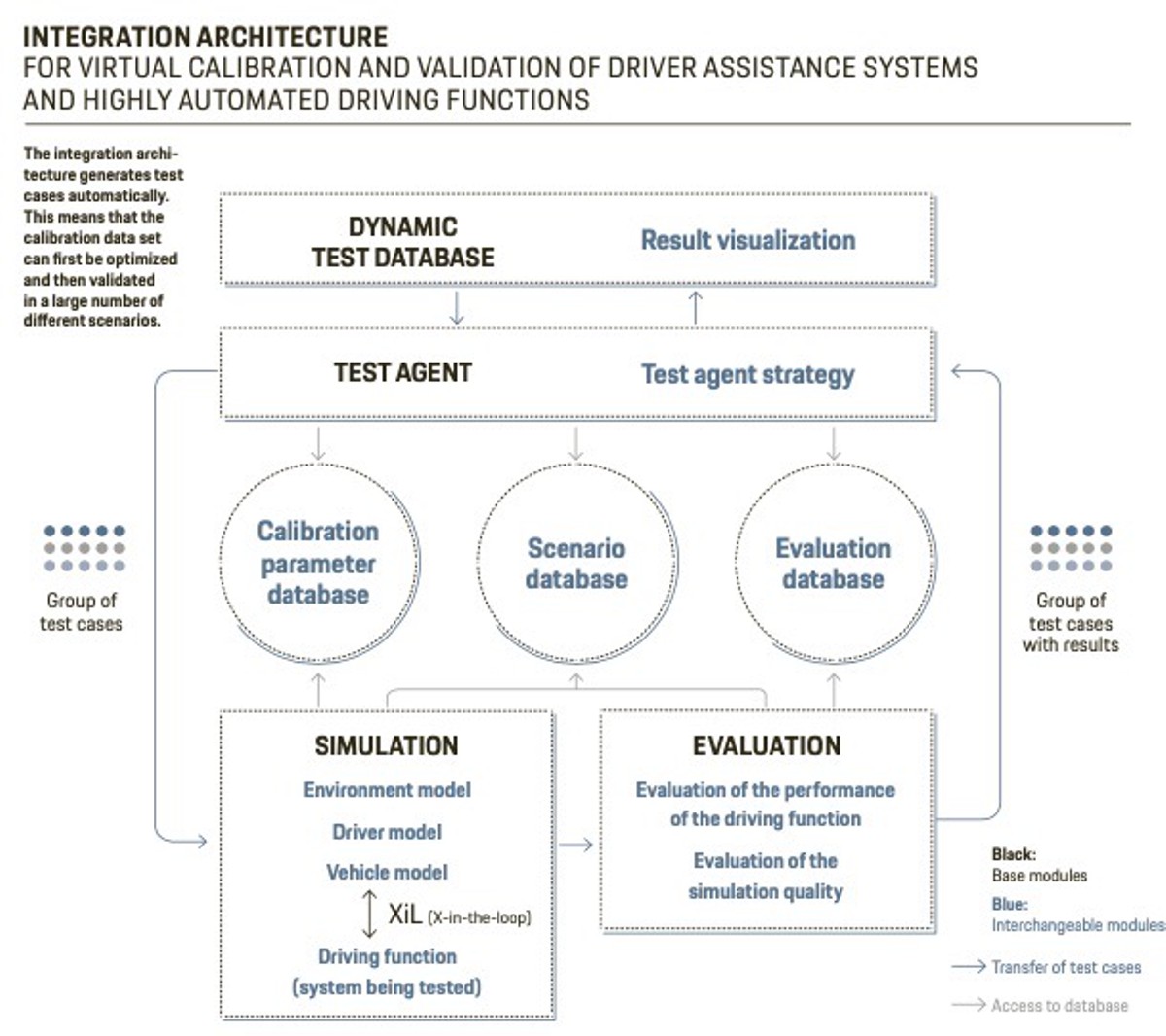 Porsche Engineering is taking a step toward a fully digital development chain by using a methodology in which calibration and validation are carried out by virtual means only. “In order to apply and validate highly automated driving functions holistically, all traffic scenarios that occur while driving would theoretically have to be recreated in countless variants and be tested with different calibration parameters. In the future, this will only be able to be done at a feasible cost if conventional methods are enhanced by approaches such as virtual integration,” says Moritz Markofsky, a doctoral student at Porsche Engineering.

In a development project, he is therefore working on the design of a modular, virtual integration architecture for driver assistance systems and highly automated driving functions. Its basic framework consists of base modules – for test case creation, simulation and evaluation, for example – that are used independently of the driving function that will be tested. Depending on the development project, this basic framework is broadening using interchangeable modules to adapt the architecture to the system being tested. This gives the new methodology a high degree of flexibility to cover the breadth of developments on the one hand, while also catering to the requirements of the future on the other – before they can even be determined in any detail.

Another special feature of the new methodology is the high degree of automation when creating test cases and conducting them as virtual driving tests. The integration architecture generates test cases automatically based on parameters for the scenario, calibration and evaluation. In an Adaptive Cruise Control (ACC) system, for example, comfort and safety are evaluated in different scenarios that involve a vehicle cutting in. For example, the calibration data set can be optimised first and then validated in a large number of different scenarios – all fully automatically.

One challenge in developing the modular concept was defining and designing the interfaces between the software modules. “Our solution gives us all sorts of freedom when it comes to the selection and definition of modules. At Porsche Engineering, many of our colleagues are working on innovative methods for developing and validating highly automated driving functions. The modular approach allows us to integrate all of these efforts easily and efficiently,” says Markofsky. One example is the central Porsche Engineering Virtual ADAS Testing Center (PEVATeC), which provides the simulation environment, virtual test scenarios, and route models.

Currently, the performance of the new development methodology is being intensively tested as part of a proof-of-concept study. But the developers also have their sights set on further optimisation. In the future, the system could use artificial intelligence to systematically apply highly automated driving functions or search for critical test cases.

“The use of artificial intelligence offers the opportunity to derive relevant test cases from the calibration and scenario parameters in an efficient way,” says Markofsky.