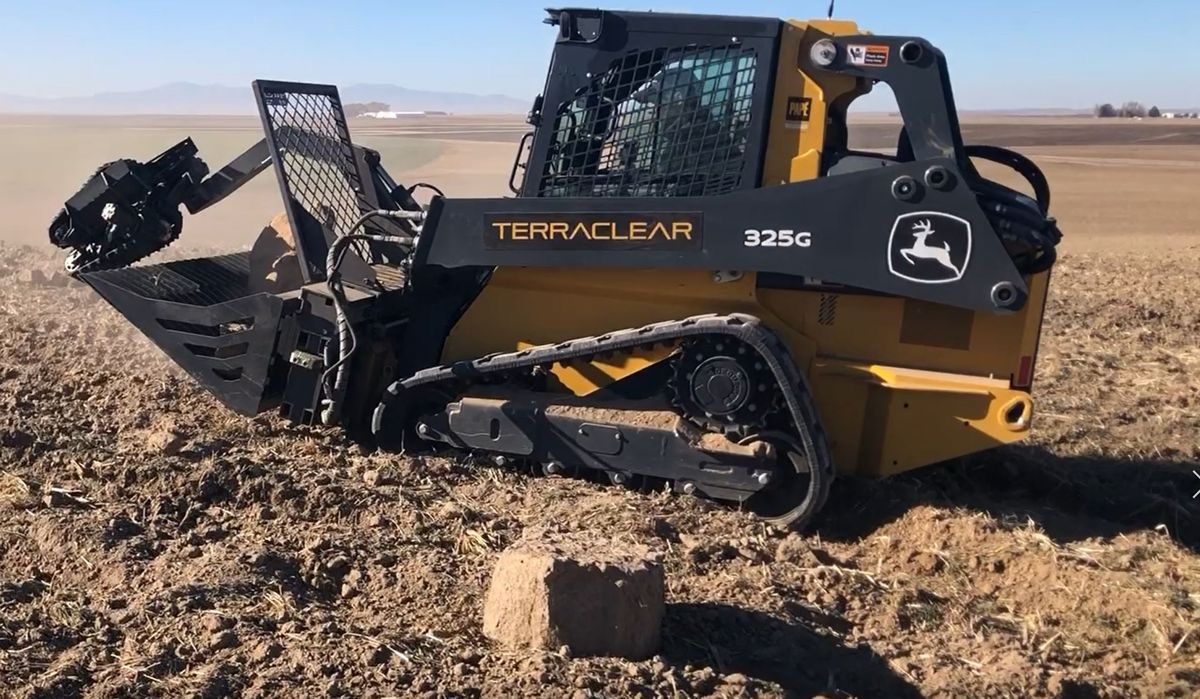 Rocks in fields break machinery, slow precision farming, and take up valuable time that modern farms do not have. TerraClear’s Rock Picker picks an average of 400 rocks per hour and can pick up rocks of up to 300 pounds.

In the past year, TerraClear has deployed early versions of their solution that both map and clear fields of rocks. These rocks not only break the backs of those picking them up, but break increasingly expensive precision machinery that is in common use by farmers for planting, irrigating and harvesting. Medium to large farms incur anywhere from $5,000 to $150,000 worth of damage and cost, even more annually for the very large farms. Spread out over hundreds of millions of acres across the globe, that’s a massive unaddressed opportunity.

Evan Aardema, a farmer and customer in southern Idaho said, “On a 150 acre field we went from it taking 4 days and 6 guys to pick the rock by hand, to 1 day with 3 guys with the Rock Picker. That’s an 8x efficiency gain in the labour, and now I’ve got 18 days of labour that I can spend on something more productive.”

Founder and CEO Brent Frei grew up on his family’s farm in Idaho and returned to this passion after founding and growing an incredibly successful tech company, Smartsheet. “This is something I’ve personally dealt with my entire life,” said Brent Frei. “There are more than 400 million arable acres worldwide that have been waiting for a cost-effective and productive solution to this problem. Repetitive tasks like this are optimal targets for automation, and the technologies we are bringing to the field dramatically reduce the labour and time needed to prep fields for planting.”

“The TerraClear team has incredible passion and expertise in both the customer base and the technology needed to address this huge problem for farmers. Rock picking fits into the category of dull, dangerous, and dirty. It’s a perfect application of robotics and AI and we are excited to back this team and mission,” said Matt McIlwain, Managing Director, Madrona Venture Group.

Earlier this year, TerraClear released the first Rock Picker, which quickly sold out and the second run will be delivered at the end of this summer. The Rock Picker enables customers to remove rocks with the touch of a button. It works today on a compact track loader or skid steer and will soon be compatible with front-end loaders on tractors.

It takes less than five minutes to mount and works in any field condition. From traditionally cultivated to no-till conditions, seeded fields, stubble, or even pastureland, the Rock Picker minimizes compaction and ground disturbance on the soil. This is an increasingly important factor in modern farming which emphasizes soil conservation practices such as no-till and minimum till practices. In addition to expanding the windows when rocks can be picked, the tools expand who can pick rocks, enabling both the young and old to contribute.

TerraClear’s future product roadmap includes integrating AI and computer vision with a fully autonomous rock picker platform, creating a Roomba for rocks. “We’re working every day towards a fully autonomous solution for rock picking – and that is a multi-year project. Along the way, we’re building solutions that solve this problem better than anything out there,” says President Trevor Thompson. The TerraClear team’s iterative approach to building means getting real solutions in the hands of farmers faster.

TerraClear also offers mapping and clearance services for those looking for a plug and play solution to picking rocks. Working with TerraClear or 3rd party drone services, TerraClear maps fields, uses AI to locate large rocks and then deploys the Rock Picker to clear the field. Few ag-tech solutions couple the ‘information’ with the ‘physical solution’ in a true end-to-end offering. While both have proven to be useful as standalone products for farmers, their combined level of efficiency really opens the opportunity for a profitable service business as well, something that the company is trialing in multiple regions this fall.

In addition to scaled production and sales in 2022, the team will use the injection of capital to accelerate the development of autonomy and grow the team in Washington and Idaho. TerraClear’s Rock Picker is currently available for pre-order.