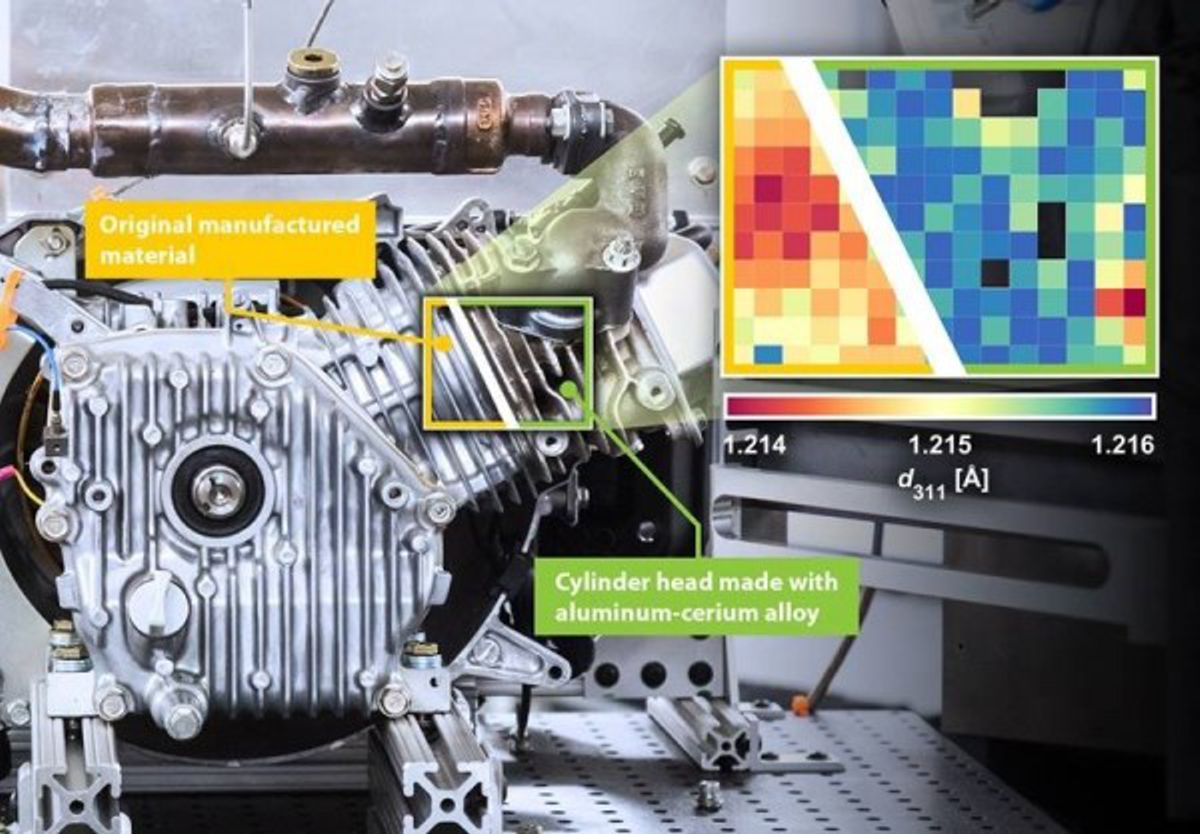 Photo Credit To Department of Energy, Office of Science

Scientists use neutrons to study Engine Material while its running

Scientists use neutrons to study Engine Material while its running

Researchers used neutrons to see how a new aluminium-cerium (AlCe) alloy behaves under the high temperatures and pressures inside an operating internal combustion engine.

The technique involves measuring how neutrons scatter when they strike a material. This reveals characteristics deep inside the material’s atomic structure. Researchers fitted an AlCe cylinder head to a commercial engine typically used in construction and industrial applications.

The researchers then used neutron scattering to see inside the AlCe head and the original material engine block in real time before, during, and after the operation of the engine.

Combustion engines are designed to withstand the extreme heat and pressure that are generated while they operate. Developing lightweight materials with improved thermal and mechanical integrity will help improve the efficiency and reliability of these engines.

This could aid research on advanced alloys for future engines and other systems.

Combustion engines are highly dynamic. Developing materials for better performance to withstand repeated exposure to extreme degrees of heat and pressure is paramount to improving combustion engine efficiency and reliability.

Researchers from Eck Industries, the University of Tennessee-Knoxville, Oak Ridge National Laboratory, and the U.S. Navy used neutrons at the Spallation Neutron Source (SNS), a Department of Energy (DOE) user facility to probe the behaviour of a new AlCe alloy in a combustion engine. Researchers cast the alloy into a cylinder head. Next, they mounted the alloy head onto a commercial combustion engine commonly used in heavy-duty applications such as tillers, generators, and pumps.

Operando neutron diffraction of the engine conducted with the SNS VULCAN instrument measured the atomic spacing in the materials. These measurements can be related to microscopic stresses, enabling a comparison of the stress distribution between the experimental cylinder head and the original engine block during different stages of the engine’s operation. The research demonstrated the superiority of cerium-rich alloy in maintaining structural integrity and provided key data for further advancing alloy development.

The novel methodology could help industry to exploit neutrons as a powerful tool to investigate other high-performance alloys and industrial systems under realistic conditions.

This work was supported by the DOE Office of Energy Efficiency and Renewable Energy, Vehicle Technologies Office, via the Advanced Combustion Engine Systems program.

The research on AlCe alloys was sponsored by the Critical Materials Institute, an Energy Innovation Hub funded by the DOE’s Office of Energy Efficiency and Renewable Energy, Advanced Manufacturing Office, and Eck Industries.