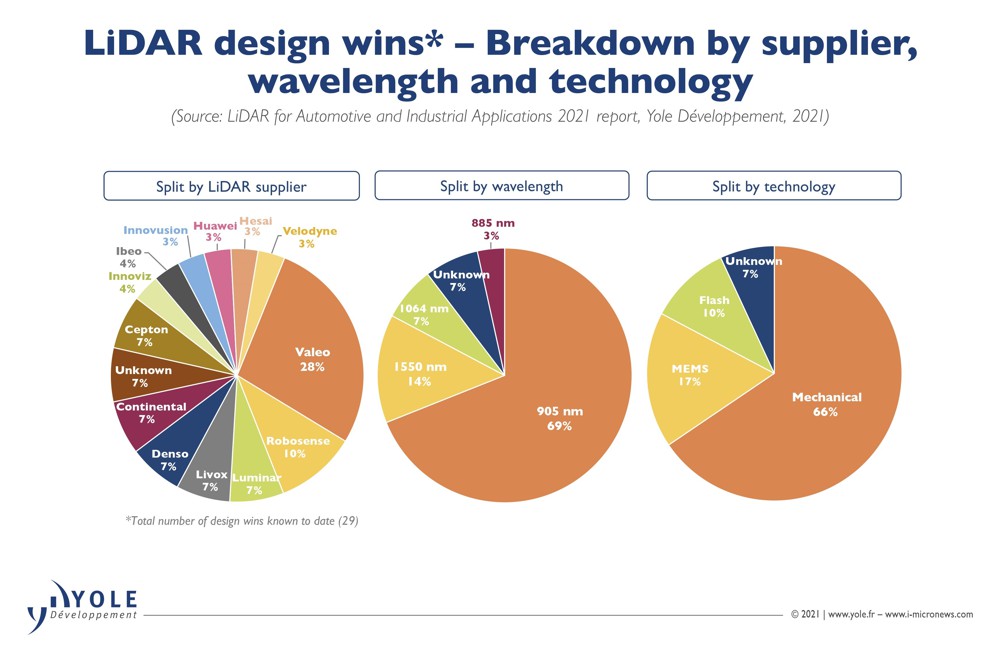 RoboSense LiDAR, the leading Smart LiDAR Sensor provider, boasts 10 percent of the market share worldwide, ranking first in China and second globally, according to the “LiDAR for Automotive and Industrial Applications Report 2021” from Yole Développement, an international market research and strategic consultancy.

The report covers the market share of automotive and industrial applications of over ten leading LiDAR companies worldwide.

RoboSense has been designated as an official long-term partner for many auto companies, and receiving orders for its RS-LiDAR-M1 (M1), RoboSense’s second-generation solid-state LiDAR, for a diverse range of mass-produced models since July 2020. These orders cover traditional automobile manufacturers and a supercar brand. Among them, GAC-Aion officially announced its plans to equip multiple models with RoboSense LiDAR in July this year.

The report also noted that mechanical LiDAR systems, including rotary and rotating mirror systems, have been losing market share since 2020 due to cost and reliability issues. It goes on to state that second-generation MEMS Smart LiDAR systems are entering the mainstream as its technology matures and cost gets more competitive.

RoboSense’s M1 employs advanced MEMS technologies. Launched in 2016 and with a demo prototype on the way next year, M1 was first shown at the International Consumer Electronics Show (CES) in 2018 and won two CES Innovation Awards in 2019 and 2020.

With over five years of research and dozens of upgrades, M1 became the first product to have a mass-production version finalized. RoboSense began mass-produced automotive-grade production of M1 in Q2 2021, and has since delivered over ten batches for models through its long-term automobile manufacturer partnerships.

M1 boasts an exclusive smart functionality named “GAZE”, which dynamically improves resolution and frame rate based on the environment, enabling vehicles to zoom in and out and augmenting their perception.

M1 enhances central resolution and extends the range of identification from 150 to 200 meters on highways, so that the vehicle can detect distant road conditions earlier. On city roads, M1 increases the frame rate from 10Hz to 20Hz and scans obstacles – such as pedestrians, electric bicycles and traffic jams – at a higher frequency for stronger near-field detection.

A multi-sensor, LiDAR-centric solution is key for accuracy and detection safety, whose reliability is known as the first step towards safe smart mobility.

As Chinese LiDAR companies continue making breakthroughs in the global march towards smart mobility, RoboSense has become a leader in China and will continue in its commitment to innovate and supply the global intelligent automotive value chain with LiDAR solutions, accelerating the evolution of smart mobility.