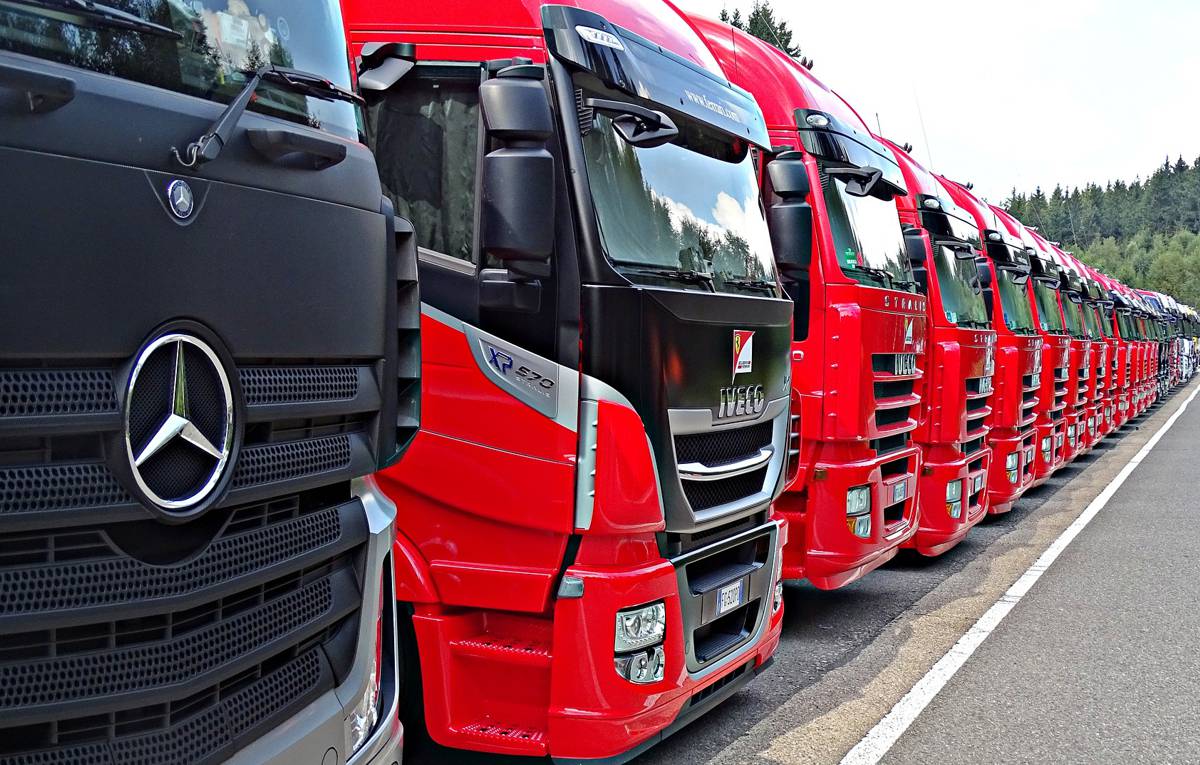 “At AEye, we set out to create low-cost and high-performance sensing systems, driven by artificial intelligence, that would exceed the capabilities of the human visual cortex,” said Luis Dussan founder, president and CTO of AEye. “By leveraging principles from automated targeting systems and biomimicry, we designed deterministic artificial intelligence sensing systems that both adhere to automotive functional safety standards and deliver the stringent performance required to address the most challenging situations. By doing so, we are ensuring the highest levels of safety for ADAS and autonomous driving, while redefining traditional LiDAR performance metrics.” 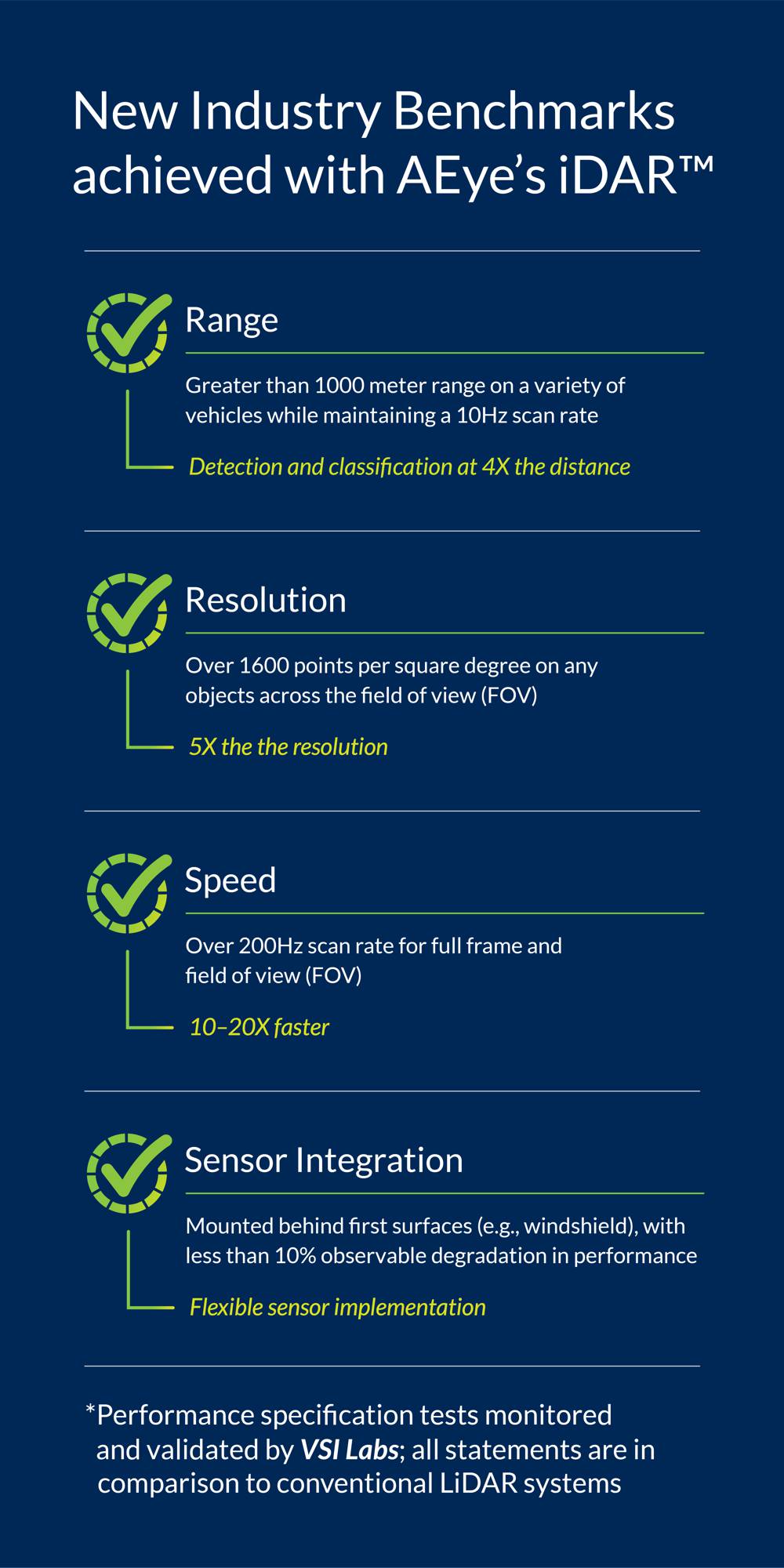 “The tests delivered impressive results,” said Phil Magney, founder and president at VSI Labs. “We monitored the LiDAR performance tests and verified that in the range test, two vehicles were clearly identifiable and visible at over 1000 meters with dozens of detections on each. We were also able to verify that AEye’s iDAR system delivers 1600 points per degree and delivers scan rates of greater than 200Hz at full frame. While these are certainly industry-leading performance metrics, possibly the most important test we validated was that the 4Sight M sensor, when placed behind a windshield at any angle of incident, did not impact performance.  This opens up new possibilities for packaging and placement that we haven’t seen before.”

To validate the performance of AEye’s iDAR and 4Sight M sensor, VSI and AEye identified metrics to be tested and jointly developed specific methodology for the collection and protocols on retention and transfer of data prior to testing.  The execution was then monitored live by VSI Labs.  The tests were conducted on the runway of an airport in Byron, California in order to isolate targets to better measure and calibrate AEye’s performance.

The range test measured resolution at range of AEye’s iDAR system. The 4Sight sensor was placed at one end of a runway, and a Chevy Bolt, and a Mercedes-Benz Sprinter Van were placed at the other end, 1,018 meters away. At this distance, iDAR was able to put over more than 50 points on the van, and over 35 points on the Bolt. Not only is this 4X the range of conventional LiDAR units, this level of point density at range easily enables perception systems to differentiate discrete objects and classify them.

From 1,000 meters away, the 4Sight M sensor has the capability to detect an object, know its velocity, its path, where it’s headed and whether it will pose a threat. By providing detection and classification at 4X the distance, AEye also achieves 4X the speed of conventional LiDAR systems, ensuring proactive safety.

The resolution test looked at points per degree, or density of resolution. For the evaluation, a one-meter square 18% reflectivity target was placed at 200 meters distance from the sensor.  VSI was able to validate that the AEye sensor, with over 250 points on the target, vastly exceeded the metric of 1600 points per square degree.

This is 5X the resolution of existing LiDAR systems and is testament to iDAR’s ability to put high density resolution where it’s needed in order to quickly identify and classify threats. The 4Sight M sensor’s high density of resolution enables it to tell the difference between what’s safe and not – i.e. between a balloon and a brick.

To test the frame rate, which measures how frequently the system is receiving real-time environmental data, AEye ran a pattern for 30 seconds over a full frame scan. AEye then reduced the vertical Field of View (FOV) to 10 degrees, and recorded 30 seconds. The 4Sight M frame rate showed a better than 200 Hz scan rate for a full frame.

AEye’s system has achieved a scan rate that is nearly 7X that of the human eye, which scans at the equivalent of 27Hz. iDAR’s scan rate is 10-20X faster than existing LiDAR systems, enabling it, like the human eye, to better track, determine and predict where an object is going. Fast scan rates ensure a vehicle potentially going at high rates of speed doesn’t miss anything critical – from a car detecting a merging bike in an urban environment, to a train inspecting for obstructions on the track ahead.

AEye’s patented agile bi-static architecture allows for flexible mounting locations, including the roof, grill and behind the windshield, with the software optimized depending on the placement. This gives OEMs complete flexibility in implementing sensors within their current design, without changing the aerodynamics of the vehicle. 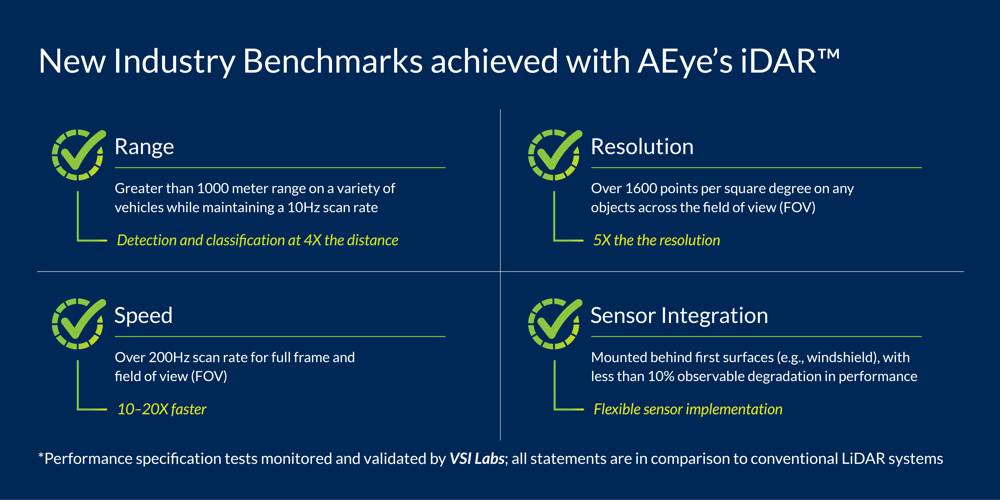 “As impressive as these performance metrics are, what they enable is even more impressive,” said automated trucking industry technology expert Richard Bishop. “The performance of AEye’s 4Sight sensor will help address critical challenges, such as identifying potholes, stationary road debris or stalled vehicles in time to change lanes, or gaining clear visibility to on/off ramps beyond 300 meters to ensure safe ingress and egress on freeways. These are game changers for the trucking industry.”

AEye’s customers and partners have the ability to see what a truly software-configurable sensor can do, and to experience the record-breaking 4Sight M performance in real time, through AEye’s unique interactive web-based demo platform, Raptor. Raptor enables participants to engage in a real-time test drive with an AEye engineer from the comfort of their own home or office.