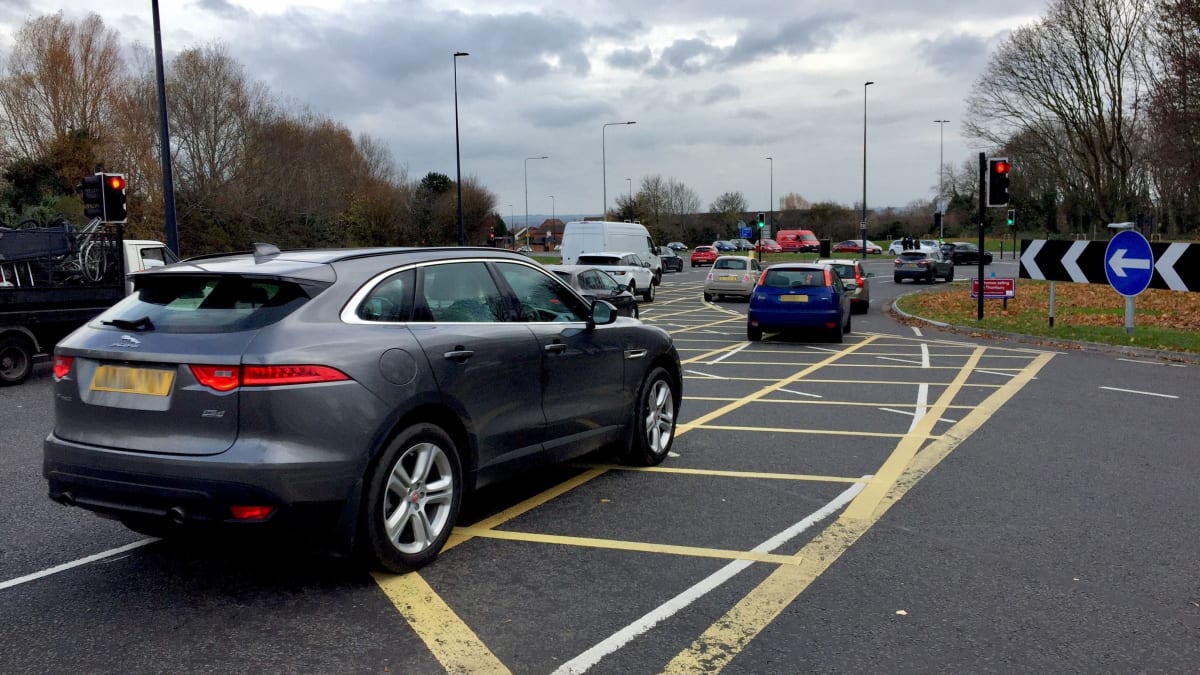 With local authorities in England on the brink of being able to apply for powers to enforce yellow box junctions, the RAC is calling on the Government to improve its official design, maintenance and enforcement guidance to councils to avoid thousands of drivers being wrongly fined.

Councils will shortly be able to apply to enforce moving traffic offences, such as driving through ‘no entry’, ‘no left’ and ‘no right’ turn signs and stopping in yellow boxes which are used to prevent gridlock at junctions, from 1 June 2022. To date, only local authorities in London and Cardiff – and elsewhere the police – have had the power to issue penalty charge notices for these infringements.

While RAC research shows 57% of drivers are generally in favour of yellow box junctions being enforced*, it has discovered that many junctions have design flaws which cause drivers to become trapped through no fault of their own, and that some are so poorly maintained that it’s hard to see where the yellow lines start and finish.

Design flaws include junctions that have been installed in completely the wrong places, boxes that are larger than they should be and ones where buildings or street furniture obstruct drivers from seeing where boxes end, making it impossible to assess whether there is enough space beyond the junction for their vehicle to fit into. The situation can be compounded by crossings and stop lines set back which make it even more difficult for drivers to see whether there is space to make it through the junction in one go as they are further away to start with.

The RAC also believes the official guidance in Chapter 5 of the Traffic Signs Manual is generally unsatisfactory as it does not clearly state the specific purpose of box junctions or show how to design them in relation to vehicle movements at junctions, and lacks any information on how they should be maintained and enforced.

The RAC learned of the gaps in the official yellow box guidance when it commissioned chartered engineer Sam Wright, who was formerly responsible for the design and approval of yellow boxes on the Transport for London road network, to write a report explaining how they are enforced in the capital with a view to highlighting the potential confusion that lies ahead as local authorities begin enforcing them.

Sam Wright explains: “The key design principle is that yellow boxes should be no bigger than is necessary to prevent vehicles obstructing through movements. They are not designed for, and serve no purpose in, situations where vehicles are travelling in the same direction.

“The second main condition is that drivers should have adequate visibility beyond the box to be able to make a clear judgement before entering it. It’s not just that drivers need to see the end of the box, they need to see that there is space beyond the box for their vehicle to fit without any part of it overhanging. In the case of a car that will be 5-6m. For larger vehicles, it will be up to 15m. I think designers should have to take a car out in rush hour to see if they can negotiate the box without stopping, before insisting that others do the same.

“Drivers may also be surprised to hear that there is no legal requirement for authorities to meet this design criteria and it’s simply down to the competence of the enforcing authority.”

In August 2020, the RAC published findings from a Freedom of Information request which showed that councils in London and Cardiff raked in £86m between 2016 and 2019 from a staggering 1.3m penalty charge notices (PCNs). More than £31m was accrued in the financial year 2018/19 from over half a million PCNs alone. The RAC believes these figures demonstrate how lucrative box junction enforcement can be for councils as well as how important it is to update the guidance properly when these powers are extended to councils across the rest of England.

RAC head of roads policy Nicholas Lyes said: “In the absence of definitive guidance on the design, maintenance and enforcement of box junctions there will be a high degree of confusion among drivers and local authorities which could lead to an avalanche of penalty charge notices being wrongly issued and then having to be appealed. This will inevitably lead to an unnecessarily high number of appeals for local authorities to review, as well as some poor outcomes for drivers.

“We have written to the Department for Transport asking them to update the guidance to make it clear to local authorities what the minimum standard for design and condition of a box junction should be before letting enforcement begin, but they are adamant the present guidance is sufficient.

“We are worried that failing to update guidance to include the lessons learnt from more than 15 years of enforcement in London will lead to countless wrong fines being issued, no end of unnecessary stress for drivers who feel they have been unfairly treated and thousands of wasted council hours investigating appeals.

“It’s absolutely crucial that yellow box junctions are enforced fairly and, as things stand, this may not be the case which will mean many drivers will be treated poorly and lose out financially as a result.”

What is the purpose of a yellow box junction?

The RAC believes the Traffic Signs Manual Chapter 5: Road Markings** section 8.1.2 is extremely unclear and unhelpful stating: ‘The purpose of a yellow box marking is to mark an area of carriageway conveying the prohibition that a person must not cause a vehicle to enter the box junction so that the vehicle has to stop within the box junction due to the presence of stationary vehicles (S9‑7‑11).’

Section 8.3.1, which looks at ‘Suitability’, is more helpful: ‘Experience has shown that the marking improves traffic flow where previously there were delays due to vehicles blocking the junction and impeding the cross flow. At signal‑controlled junctions, the queues of traffic left at the end of a green phase have been significantly reduced and there have been marked reductions in injury accidents, especially those involving pedestrians.’

Using information gleaned from Transport for London and Cardiff City Council – where there are already enforcement powers – Sam Wright and the RAC believe a box junction is a traffic control measure designed to prevent gridlock at junctions.

Under the rules of the Highway Code, you’re not allowed to enter the yellow box unless your exit is clear and there is enough space on the other side of the junction for your car to clear the box completely without stopping. There is an exception – if you want to turn right, you are allowed to enter the box and wait if you’re prevented from turning by oncoming traffic, or by other vehicles waiting to turn right. It’s perfectly legal for you to wait on the yellow criss-cross provided your exit road is clear.

Where can yellow box junctions be used?

Subject to the definition of a yellow box junction being satisfied, the regulations state that boxes can be only be placed in specified locations, namely:

What’s the penalty for stopping in a yellow box junction?

In London, many box junctions have cameras in place, and you could be fined if you’re caught using the box incorrectly. On Transport for London (TfL) red routes, the penalty charge notice is now £160, reduced to £80 if paid within 14 days.

The penalty in Cardiff, which is the only authority outside London currently enforcing box junctions, is £70.00. If payment is made within 21 days, then this is reduced to £35.00. Drivers can appeal fines if they think they can prove their innocence, but if they don’t win their cases it could prove to be a costly and time-consuming process.