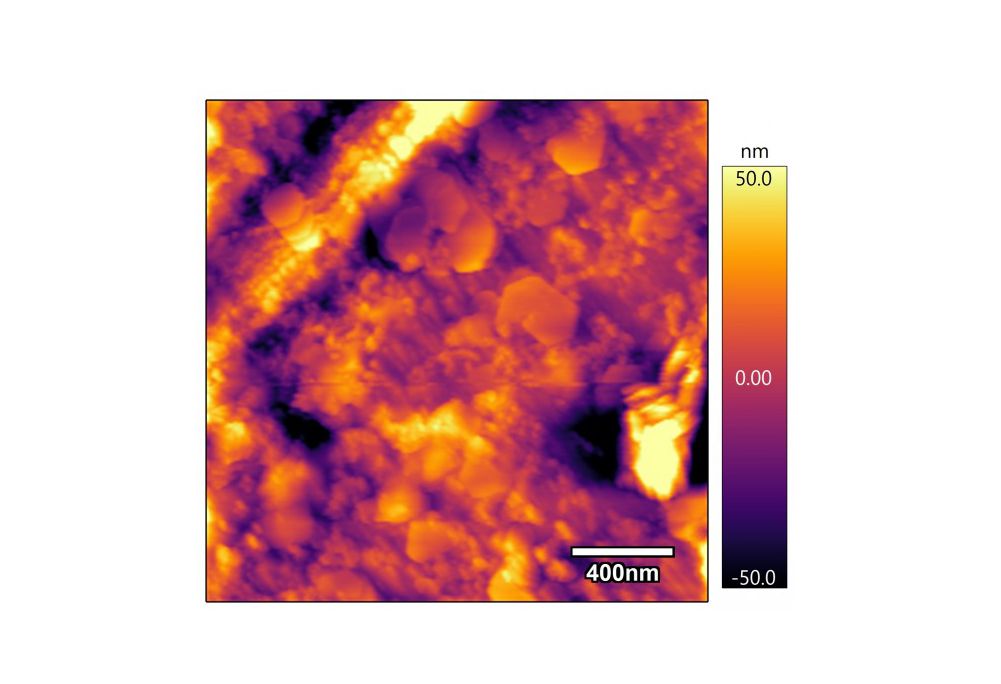 One can easily see with the naked eye that leaving an old nail out in the rain causes rust. What does require the keen eyes and sensitive nose of microscopy and spectroscopy is observing how iron corrodes and forms new minerals, especially in water with a pinch of sodium and calcium.

Thanks to a new technique developed by chemists at Michigan Technological University, the initial stages of this process can be studied in greater detail with surface analysis. The team, led by Kathryn Perrine, assistant professor of chemistry, recently published their latest paper in The Journal of Physical Chemistry A.

The group’s main finding is that the cation in solution – positively charged sodium or calcium ions – influences the type of carbonate films grown when exposed to air, which is composed of atmospheric oxygen and carbon dioxide. The gradual exposure of oxygen and carbon dioxide produces carbonate films specific to the cation. The iron hydroxides of different shapes and morphologies are without gradual air exposure, not specific to the cation.

A better understanding of this process and how fast the minerals form opens up possibilities for monitoring carbon dioxide capture, water quality byproducts and improving infrastructure management for old bridges and pipes.

Even though rust and related iron minerals are a well-known part of life on Earth’s surface, the environments they form in are quite complex and varied. Rust is usually composed of iron oxides and iron hydroxides, but corrosion can also lead to iron carbonate and other mineral formation. For each form, it is difficult to understand the best conditions to prevent or grow it. Perrine points to major environmental issues like the Flint water crisis as an example of how something as simple as rust can so easily slip into more complicated, unwanted subsequent reactions.

“We want to measure and uncover chemical reactions in real environments,” Perrine said, adding that her team focuses specifically on surface chemistry, the thin layers and films where water, metal and air all interact. “We have to use a high level of surface sensitivity in our analysis tools to get the right information back so we can really say what is the surface mechanism and how iron transforms.”

Studying the surface science of materials is inherently interdisciplinary; from materials science to geochemistry, from civil engineering to chemistry, Perrine sees her work as a bridge that helps other disciplines better inform their processes, models, interventions and innovations. To do so requires high precision and sensitivity in her group’s research.

While other methods of monitoring surface corrosion and film growth do exist, Perrine’s lab uses a surface chemistry approach that could be adapted to analyse other reduction and oxidation processes in complex environments. In a series of papers, they vetted their three-stage process —assessing changes to the electrolyte composition and using oxygen and carbon dioxide from air as a reactant, to observe real-time formation of the different minerals observed at the air-liquid-solid interface.

Precise Measurements are the Molecular Lens to Seeing Chemistry

“The spectroscopy tells us the chemistry; the microscopy tells us the physical changes,” Perrine said. “It’s really difficult to image these corrosion experiments in real-time with AFM because the surface is constantly changing, and the solution is changing during corrosion.”

What the images do reveal is a sequence of pitting, chewing and degrading the surface, known as corrosion, which produces nucleation sites for the growth of minerals. The key part is watching the initial stages as a function of time.

“We can watch the corrosion and film growth as a function of time. The calcium chloride [solution] tends to corrode the surface faster, because we have more chloride ions, but also has a faster rate of carbonate formation,” Perrine said “it’s possible to see how sodium chloride solution corrodes the surface of iron gradually and continues forming rust as the solution dries.”

She adds that since iron is ubiquitous in environmental systems, slowing down and closely observing mineral formation comes down to adjusting the variables in how it transforms in different solutions and exposure to air.